US election 2020: The war hero who could be Biden's running mate 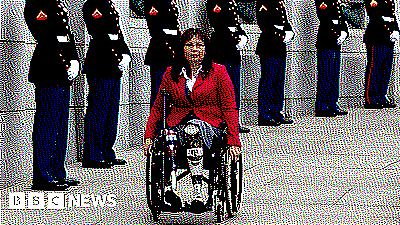 Who is Tammy Duckworth, the US senator from Illinois who is reportedly on the short list for the vice-presidential slot on the Democratic ticket?

Born in Bangkok and wounded in the Iraq war, Tammy Duckworth has a Purple Heart and the instincts of a street fighter.

Her name has come up frequently during high-level discussions about the vice-presidential slot for the presumptive Democratic nominee, Joe Biden. She has also become a target for Fox News's Tucker Carlson and other conservatives.

When she said recently on CNN that she was open-minded about the prospect of removing US monuments to US founders and slave holders, Mr Carlson questioned her patriotism.

She fired back, saying that Mr Carlson should "walk a mile in my legs and then tell me whether or not I love America".

Her challenge to Mr Carlson attracted national notice and drew people's attention both to her political acumen and to her military background. She was shot down in a helicopter during the Iraq war and lost her legs.

Many Democrats believe that her military record and her tenacity during fights with conservatives, as well as her background as an Asian-American, would strengthen Mr Biden's candidacy. If he chose her as a running mate, say her supporters, she would help to shore up votes among veterans, minorities and women.

'Walk a mile in my legs' Tammy Duckworth has said

Yet many believe that Mr Biden should pick a black running mate instead - Senator Kamala Harris is frequently mentioned as a possibility. Besides that, Ms Duckworth's home state is safely Democratic. Other contenders for the Democratic ticket, a group that includes New Mexico Governor Michelle Lujan Grisham, could help Mr Biden in states where he could use a boost.

The choice of a running mate has added importance for Democrats because of Mr Biden's age and his own assessment of his role.

That means that the person who serves as his vice-president could someday become president.

Ms Duckworth, who is 52, is best known for her work on veterans' issues. In addition, she has worked on health-care policy and spoken frequently about national security. She fought in the Iraq war, but she believes that it was a mistake.

"It's a tough lesson," she says. "And I hope this nation will be a lot more sceptical of the reasons to go to war."

She also has a compelling personal story. She and her husband, Bryan Bowlsbey, have two daughters, Abigail and Maile Pearl, and she was the first to bear a child while serving as a US senator.

Her father, Frank, a US citizen, worked for the United Nations, and her mother, Lamai, is originally from Thailand.

Ms Duckworth, who speaks Thai, lived with her parents in Singapore, Indonesia and Cambodia because of her father's UN job.

The family was in Cambodia, living in Phnom Penh during a period of violence shortly before the Khmer Rouge took power in the mid-1970s.

She recalls going to her market with her mother when, suddenly, bombs began falling. Her mother pushed her to the floor of the car, Ms Duckworth says, "so I wouldn't see the bloodiness".

Ms Duckworth later enlisted in the military, following in the footsteps of her father, a Vietnam veteran. She once told me that she did not see herself ever running for president.

Joe Biden has reportedly taken a shine to Tammy Duckworth

"I don't have that fire in my belly," she says. But she is a ferocious advocate for Mr Biden, and he has taken a shine to her.

During an online fundraiser, he praised her bravery in battle and in politics. "I can't think of anyone who has shown more courage," he said. Addressing her directly, he said: "I'm grateful for you here with me in this fight."

Ideologically, Ms Duckworth is a good match for Mr Biden, a centrist Democrat. Among Democrats in the US Senate, she, too, appears in the middle of the ideological spectrum.

In recent weeks, she has ripped into President Donald Trump and his "failure to lead our nation", showing her willingness to act as Mr Biden's attack dog during the campaign.

Mr Biden's aides interviewed her not long ago for the vice-presidential slot, she said during a live Washington Post chat on Thursday. She described the job interview as "positive".

Who could be Joe Biden's running mate?

Presidential candidate Joe Biden has pledged he would choose a woman as his running mate. Those on the rumoured shortlist include:

After retiring from the military, Ms Duckworth worked on veterans' issues at the state and national level and was elected to Congress in 2012. She won a senate seat in 2016, becoming the state's junior senator and following in the footsteps of President Barack Obama. Her rise from state politics to national prominence has been fast.

Dick Simpson, the head of the political science department at the University of Illinois at Chicago, says that she has moved up more rapidly than anyone in politics he has seen in half a century. Mr Obama, who also got his start in Illinois politics, rose higher than Ms Duckworth. But as Mr Simpson points out: "It took a little longer."

Peter Levin, the founder of a software company in Washington, worked with her at the US department of veterans affairs and says that she has an innate talent for politics.

"She naturally brings out the best in people even when there's tension in the room," he says, explaining that she is skilled at tuning "her language, her emphasis, to the person she's speaking to" in order to build consensus.

Her record in politics is far from perfect, however.

She has struggled to get legislation passed in Congress, and she has been criticised for her work on veterans' issues. She said all the right things, according to her detractors in Illinois, but many of the veterans' programmes that she spoke about never got off the ground.

A spokesman for Ms Duckworth disagreed with the negative assessment of her work as a lawmaker, saying that she has been effective as a senator and has, among other achievements, passed bipartisan legislation and blocked "efforts to repeal the Americans With Disabilities Act".

The criticism has hardly slowed her down, and throughout her career she has shown an unusual resolve. While recovering from her war injuries at Walter Reed Army Medical Center in Maryland in 2004, she was given "heavy-duty pain blocks", she says, but they barely muffled the agony of losing her legs.

Tammy Duckworth is the first Thai-American woman elected to Congress

Yet during her recovery and in the years that followed, she has shown almost no self-pity: "For me, it just comes back to the fact that I'm so grateful to be alive. I know that sounds so corny," she says. "But I think of what my buddies did to get me out and of the pilot who carried me to safety. I can't mope around."

Her supporters are hoping that Mr Biden will choose her as his running mate so that she can bring her enthusiasm to the campaign. He is expected to announce his decision this week.