Coronavirus in the UK: How many confirmed cases are there in your area? 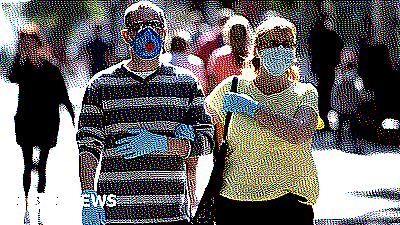 There have been more than 370,000 confirmed cases of coronavirus so far in the UK and 41,000 people have died, government figures show.

However, these figures include only people who have died within 28 days of testing positive for coronavirus and other measures suggest the number of deaths is higher.

Find out how the pandemic has affected your area and how it compares with the national average.

The postcode search has been updated to replace data for health boards in Scotland with data for local councils. In England, data for county councils has been replaced with data for district councils. Figures for boroughs and unitary authorities remain unchanged.

The government announced 2,621 new cases on Monday - a decline on Sunday's figure of 3,330. Recent days have seen the highest daily cases since mid-May.

The rise has prompted the government to reintroduce new restrictions on social gatherings in England. Groups of more than six people are now banned from meeting anywhere socially indoors or outdoors. with some exceptions.

Daily confirmed cases began edging up again in July - after falling significantly from their April peak - as lockdown restrictions imposed in March were eased.

The official number of cases during the peak in the UK underestimated the true level of infection at the time, as widespread testing was not as available until mid-May. Before then, testing was targeted - mainly being used in hospitals and other care settings.

The rise in cases since July can be partly explained by increase in testing - if you are testing more, particularly in hotspots, you are likely to find more cases.

But the most recent estimate from the Office for National Statistics (ONS) suggests that the number of infections has increased in recent weeks.

The latest survey from the ONS, released last Friday, estimates that one in 1,400 people in England had coronavirus. The figure for the previous week was one in 2,000.

Based on tests in households for current infection, the survey is thought to give one of the most accurate pictures of whether or not new cases are increasing.

The apparent rise in cases since July has not, so far, translated into an increase in people being admitted to hospital.

There are several local hotspots in the UK which have seen a spike in cases since the nationwide lockdown ended.

Public Health England produces a weekly watchlist of areas of concern, based on an assessment of incidence rates, and other indicators such as trends in testing, healthcare activity and deaths.

Birmingham, Sandwell and Solihull are the latest areas to be designated areas of intervention.

Last Friday, a ban on households mixing was announced in all three areas and will come into force on Tuesday.

Rossendale, Burnley and South Tyneside are among the areas designated as "areas of enhanced support", meaning the government will work with local authorities to provide additional resources - such as testing or contact tracing - to help bring the numbers of infections down.

In Wales, the county borough of Caerphilly has been placed under local lockdown and in Northern Ireland restrictions on visiting other households are to be re-introduced in Ballymena and Belfast.

While the number of new confirmed cases of coronavirus has been rising again recently, government-announced deaths have continued to fall since a peak in mid-April.

On Monday, PHE announced nine further UK deaths - seven in England and two in Northern Ireland. No new deaths were reported in Scotland or Wales.

In August, the government's death toll in England was reduced by 5,340 following a review of the way coronavirus deaths are counted.

New rules mean deaths anywhere in the UK are included in the coronavirus total only if they occurred within 28 days of a positive test. Previously in England, all deaths after a positive test were included.

England has seen the majority of UK deaths from Covid-19. Using the 28-day cut-off, there have been just under 37,000.

Government figures count people who tested positive for coronavirus and died within 28 days.

But there are two other measures.

The first includes all deaths where coronavirus was mentioned on the death certificate, even if the person had not been tested for the virus. The most recent figures suggest there had been nearly 57,000 deaths by 28 August.

The third method looks at all UK deaths over and above the number usually expected for the time of year - known as excess deaths. This measure shows the death toll was above 65,000 by 28 August.

But the ONS says the increase is not due to coronavirus.

The government has argued it is too soon to make definitive international comparisons but, as the impact of the first wave becomes clear, analysis is beginning to suggest the UK has been one of the hardest hit countries.

Figures released by the ONS at the end of July showed that England had the highest levels of excess deaths in Europe between the end of February and the middle of June.

Some areas of Spain and Italy were harder hit than UK cities. But the analysis shows the epidemic in the UK was more widespread than in other countries. Scotland saw the third highest death rate in Europe - behind England and Spain. Wales was in fifth place and Northern Ireland in eighth.

The "R number" is the average number of people an infected person will pass the disease on to.

If R is below one, then the number of people contracting the disease will fall; if it is above one, the number will grow.

On Friday, the government raised its estimate for the R number across the whole of the UK to between 1.0 and 1.2.

The government has said in the past that the R number is one of the most important factors in making policy decisions.