Coronavirus: What are social distancing and self-isolation rules? 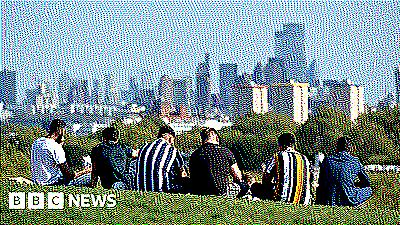 England and Scotland have reduced the number of people allowed to meet socially to six, amid a rise in coronavirus cases. Wales has also cut the number who can meet to six - but only indoors.

How does that change what you are allowed to do?

In England, the limit of up to six people from multiple households meeting up applies both indoors and outdoors, and to all ages.

Gatherings in private homes, venues like pubs and restaurants, and in outdoor spaces like parks are all affected.

In Scotland, a maximum of six people from two households can meet. Unlike England, children under 12 - from those two households - are not included in the total.

Northern Ireland has not announced any changes.

The guidelines for England refer to times when "mingling" could break the rules. It says "there can be multiple groups of six people in a place, provided that those groups do not mingle".

If you are at a pub, restaurant or other venue, you should "avoid mingling with anyone outside the group you are with, even if you see other people you know".

People attending a protest, or other organised event, should also attend in groups no larger than six.

Home Secretary Priti Patel said two families of four stopping for a chat would be another example of mingling that broke the rules.

Exceptions allowed in England include:

Weddings, funerals and special religious occasions can go ahead with up to 30 people attending - in groups of six or less. However, celebrations afterwards are limited to weddings or civil partnerships.

Yes. Pubs, restaurants, shops and other venues will remain open if they follow safety rules and allow for social distancing.

Each group can have no more than six people in it and venues should also allow for social distancing between groups.

Places of worship can have as many people in them as is safe to do so. Again, people can only attend in groups of six or less.

You can play organised indoor and outdoor sports in groups of more than six, but not on an informal basis.

So, a Sunday League football match could go ahead, but not a game in the park with more than six people.

Group exercise classes are exempt from the rule of six, as long as they are organised under Covid-secure guidelines.

The government has listed 30 organised sports which are permitted with more than six participants. It says others will also be allowed if a sport's organising body has published guidelines.

The new measures mean police can break up groups larger than six.

Members of the group can be fined if they fail to follow the rules. This will be £100 for a first offence, doubling on each further offence up to £3,200.

Each UK nation is advising people to stay 2m (6ft) away from anyone they don't live with. However, there are some differences:

A medical test that can show if a person has had the coronavirus and now has some immunity. The test detects antibodies in the blood, which are produced by the body to fight off the disease.

Someone who has a disease but does not have any of the symptoms it causes. Some studies suggest some people with coronavirus carry the disease but don't show the common symptoms, such as a persistent cough or high temperature.

The first part of the UK's strategy to deal with the coronavirus, which involved trying to identify infected people early and trace anyone who had been in close contact with them.

One of a group of viruses that can cause severe or mild illness in humans and animals. The coronavirus currently sweeping the world causes the disease Covid-19. The common cold and influenza (flu) are other types of coronaviruses.

The disease caused by the coronavirus first detected in Wuhan, China, in late 2019. It primarily affects the lungs.

The second part of the UK's strategy to deal with the coronavirus, in which measures such as social distancing are used to delay its spread.

A fine designed to deal with an offence on the spot, instead of in court. These are often for driving offences, but now also cover anti-social behaviour and breaches of the coronavirus lockdown.

Health experts use a line on a chart to show numbers of new coronavirus cases. If a lot of people get the virus in a short period of time, the line might rise sharply and look a bit like a mountain. However, taking measures to reduce infections can spread cases out over a longer period and means the "curve" is flatter. This makes it easier for health systems to cope.

Short for influenza, a virus that routinely causes disease in humans and animals, in seasonal epidemics.

Supports firms hit by coronavirus by temporarily helping pay the wages of some staff. It allows employees to remain on the payroll, even though they aren't working.

How the spread of a disease slows after a sufficiently large proportion of a population has been exposed to it.

A person whose body can withstand or fend off a disease is said to be immune to it. Once a person has recovered from the disease caused by the coronavirus, Covid-19, for example, it is thought they cannot catch it again for a certain period of time.

The period of time between catching a disease and starting to display symptoms.

Hospital wards which treat patients who are very ill. They are run by specially-trained healthcare staff and contain specialist equipment.

Restrictions on movement or daily life, where public buildings are closed and people told to stay at home. Lockdowns have been imposed in several countries as part of drastic efforts to control the spread of the coronavirus.

The third part of the UK's strategy to deal with the coronavirus, which will involve attempts to lessen the impact of a high number of cases on public services. This could mean the NHS halting all non-critical care and police responding to major crimes and emergencies only.

The NHS's 24-hour phone and online service, which offers medical advice to anyone who needs it. People in England and Wales are advised to ring the service if they are worried about their symptoms. In Scotland, they should check NHS inform, then ring their GP in office hours or 111 out of hours. In Northern Ireland, they should call their GP.

Multiple cases of a disease occurring rapidly, in a cluster or different locations.

An epidemic of serious disease spreading rapidly in many countries simultaneously.

This is when the UK will start to lift some of its lockdown rules while still trying to reduce the spread of coronavirus.

PPE, or personal protective equipment, is clothing and kit such as masks, aprons, gloves and goggles used by medical staff, care workers and others to protect themselves against infection from coronavirus patients and other people who might be carrying the disease.

The isolation of people exposed to a contagious disease to prevent its spread.

R0, pronounced "R-naught", is the average number of people who will catch the disease from a single infected person. If the R0 of coronavirus in a particular population is 2, then on average each case will create two more new cases. The value therefore gives an indication of how much the infection could spread.

This happens when there is a significant drop in income, jobs and sales in a country for two consecutive three-month periods.

Severe acute respiratory syndrome, a type of coronavirus that emerged in Asia in 2003.

Staying inside and avoiding all contact with other people, with the aim of preventing the spread of a disease.

Keeping away from other people, with the aim of slowing down transmission of a disease. The government advises not seeing friends or relatives other than those you live with, working from home where possible and avoiding public transport.

Measures taken by a government to restrict daily life while it deals with a crisis. This can involve closing schools and workplaces, restricting the movement of people and even deploying the armed forces to support the regular emergency services.

These can be used by government ministers to implement new laws or regulations, or change existing laws. They are an easier alternative to passing a full Act of Parliament.

Any sign of disease, triggered by the body's immune system as it attempts to fight off the infection. The main symptoms of the coronavirus are a fever, dry cough and shortness of breath.

A treatment that causes the body to produce antibodies, which fight off a disease, and gives immunity against further infection.

A machine that takes over breathing for the body when disease has caused the lungs to fail.

A tiny agent that copies itself inside the living cells of any organism. Viruses can cause these cells to die and interrupt the body's normal chemical processes, causing disease.