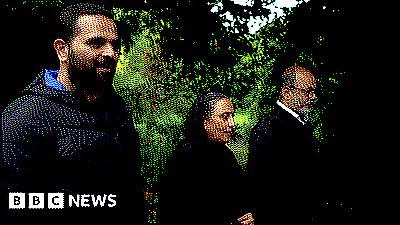 When Muslims are describing Eid celebrations to people from other faiths, many will say it's the equivalent of Christmas - a noisy, joyous festival of prayer, present-giving and fun with friends and family.

But in Leicester - one of Britain's most vibrant multi-cultural cities - this year's Eid al-Adha is looking rather more muted.

With the city still in lockdown and restrictions not due to be lifted until Monday, religious leaders and councils have reminded people not to gather in mosques and everyone has been encouraged to stay at home.

Celebrations began on Thursday evening and will run until Monday evening.

For Jawaahir Daahir, explaining to her three-year-old grandson Kamil that Eid would not be going ahead as planned has been "heartbreaking".

"It's so sad - what can you say? It is so hard for the children to understand."

Usually, Ms Daahir's house would be full of family members at this time - her six children, in-laws and her grandson.

After going to the mosque for prayer, there would be hugs with friends, sweets for the children and an array of specially-prepared dishes and presents at home.

The family would also arrange days out together - whether for meals at restaurants or walks at local beauty spots.

This year, although Ms Daahir has still been preparing some of the traditional food, those enjoying it will be limited to those living in her home - her mother and one of her daughters.

"We won't be leaving the house, basically," she said. "We will still be praying at home and talking to our family but it won't be the same."

Ms Daahir said she believed the lockdown would have a knock-on effect on celebrations throughout the city.

"This is the time when people buy presents and clothes, so it will affect businesses as well," she said.

Leicester was placed into an extended lockdown on 29 June and a recent review said places of worship would be able to fully reopen from Monday - when Eid ends.

Similarly to some parts of northern England, residents have been told not to meet with different households in their homes and gardens and park gatherings should be limited to six people.

It has been the second time Muslims in Leicester have marked a festival in lockdown after Ramadan and Eid al-Fitr fell in April and May.

The Patel family from Leicester had planned to perform the Hajj in Mecca this weekend but have had to postpone it to next year.

The annual pilgrimage to the holy site in Saudi Arabia would usually attract up to two million worshippers but this year all tourists and over-65s have been banned.

"It's a once-in-a-lifetime opportunity to go and we honestly thought this was our time but it just wasn't meant to be."

The family had been planning the pilgrimage for two years and hoped to take the trip after Mr Patel suffered a major heart attack.

"For Eid this year, everyone is distant. We can't celebrate as we normally would but hopefully it won't be for long," he said.

"I wanted to complete my Hajj before I turned 40 next year but you just never know what's round the corner. I feel fit and well at the moment but who knows, this time next year I might not be."

It said: "We know that congregational prayer is an important part of many religious practices and unfortunately that hasn't been possible for many months now because of the increased risk of Covid-19 transmission."

Imam Dr Hafiz Ather said this year's Eid was a time for people to be positive and grateful.

"Normally a prayer would commence the day of Eid in a local mosque but unfortunately we won't be able to do that here in Leicester," he said.

"We will still be able to spend time in prayer at home. We will still have a lovely meal and share stories and memories with our children and we will still remain upbeat.

"It is difficult this year. It is unprecedented. But at the same time we are just happy to be alive."