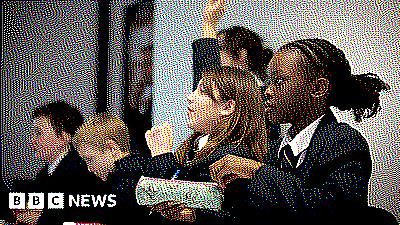 Pupils will face the front, but the safety plans will not be based on social distancing

The return-to-school plans for autumn in England will involve entire year groups staying in separate "bubbles".

A draft of the plans, set to be announced later this week, has been published by the Huffington Post.

It means that groups of up to 240 pupils could be kept apart within a school, with a separate time for starting and finishing.

It could also mean they would all be sent home if there was a Covid-19 case in the group.

There will also be a recognition of the need for pupils to catch up after months out of regular lessons, with an emphasis on core subjects such as English and maths.

The plans, understood to be draft documents shared as part of a consultation, show the approach to safety in the autumn is an expansion of the "protective bubble" approach already used.

Rather than relying on social distancing, the aim is to limit the points at which the infection could be spread, by keeping pupils in separate, isolated groups through the school day, with their own breaks and lunchtimes.

In primary schools this term, these bubbles have been up to 15 pupils, but in the plans for the autumn they could include a full secondary year group, which if there were eight classes, could be 240 pupils.

In primary schools in the autumn, the bubbles are expected to be a whole class of 30 pupils.

If a pupil shows coronavirus symptoms, parents will have to quickly come to collect their child.

"While waiting, the child should be kept 2m away from the supervising teacher," says the leaked guidance.

"If that is not possible, in the case of a young child or one with complex needs, staff should wear full PPE - disposable gloves, a disposable apron, a fluid-resistant surgical face mask and in some cases eye goggles."

There will not be any fixed social distancing requirements for pupils in primary school - and in secondary it will be 1m, but only where possible, the leaked documents suggest.

But teachers will be expected to maintain social distancing at the front of a class - in classrooms in which pupils will face forward, rather than facing each other around circular tables.

On Monday, the Education Secretary Gavin Williamson promised a comprehensive track and trace system would be in place for autumn.

That would allow year groups or schools to be closed down if there were Covid-19 cases, or if there were signs of a local upsurge infections.

There will be routines of regular hand-washing, but there are not expected to be temperature checks or masks, either for staff or pupils.

Pupils will be encouraged to get back on track with their learning when schools return for full-time lessons.

Attendance will be compulsory - with confirmation on Monday that penalty fines can once again be issued to parents who do not send their children back to school, at the usual level of £60 and then £120 for late payment.

And there will be a push on helping children to catch up in English and maths, which could include narrowing options in GCSE subjects and repeating work from before the lockdown.

An increase in disruptive behaviour is anticipated - but it is expected that Ofsted will not be carrying out routine inspections during the term.

In response to the leaked documents, a Department for Education spokesman said there would be continuing consultation, ahead of the full plans being published this week.

"We've said we want to see all children back at school in September - returning to full primary and secondary class sizes in a safe way," said the DfE spokesman.