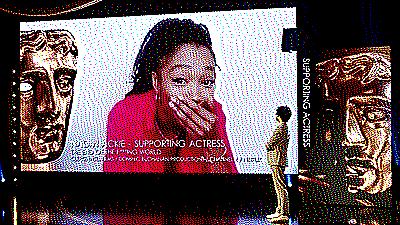 It was "showbusiness as usual" at this year's Bafta TV Awards, despite the dramatically pared-down ceremony.

There was no red carpet or live audience on Friday evening, and winners dialled in remotely to accept their prizes.

"Tonight, we reward various people while keeping the kind of distance from them that I've dreamed of my entire life," joked host Richard Ayoade.

"It is sad it has taken a pandemic to enforce the most basic parameters of personal space."

Chernobyl and Stath Lets Flats were among the big winners of the night, and Glenda Jackson won her first TV Bafta at the age of 84.

Here are some ceremony highlights alongside a few things we learned in the winners' Zoom room.

However, she and her co-star Phoebe Waller-Bridge did have to break in to their friend's house to get a good enough signal to dial in.

The pair, each nominated for their performances in Fleabag, were spending the evening together at Phoebe's place - before everything went wrong.

"Our connection right up to the wire wasn't working," Clifford explained afterwards. "We were trying to do it in Phoebe's garden, and we were getting feedback, and the poor Bafta producers were saying 'you need to sort it out'.

"So we broke into our friend's house, who lives down the road, he's away on holiday."

Fortunately, they asked his permission first - and they didn't need to smash any windows.

"He was more than happy to oblige," Clifford clarified. "And Phoebe had a spare set of keys."

We take our hats off to this truly outstanding tan.

Which, to be fair, he may not have had to travel far to achieve - as the UK had its hottest day of the year on Friday.

Usually at the Baftas, the stars receive their trophy there and then - but this year they'll have to wait for them to be delivered in the post.

Romesh Ranganathan came up with his own solution to this problem as his Misadventures documentary series won the features prize.

His DIY Bafta trophy appeared to be made of some tinfoil, sticky tape and a Christmas bauble, which he accepted on his own awards podium - made from a dustbin.

Watching on TV, you may have (quite rightly) been taking the opportunity to nose around some celebrities' houses.

On first glace, The End of the F****** World star Naomi Ackie appeared to have the most boring background of the night - a plain white wall.

But, the best supporting actress winner explained afterwards, that's because she's currently in the process of moving house.

"Do you wanna see?" she asked, tilting her camera. "This is my room right now because I'm packing - everything is a mess.

"My bed is in the wrong place, I've got loads of furniture that's unbuilt just behind me... and I had to buy a sofa, they're really expensive - did you know that?!

"So I would have made it more interesting if I could."

Not everybody had to dial in to the ceremony via Zoom - some special guests joined Ayoade in the Bafta studio.

Normal People's Daisy Edgar-Jones and Paul Mescal were there to present the entertainment performance prize to Mo Gilligan.

But prior to the ceremony, the pair ensured they were fully compliant with social distancing guidelines, by bringing a measuring tape with them.

It's probably the furthest apart they've ever been from each other's bodies, as anyone who has watched the series will tell you.

Mescal was still riding high from his Emmy nomination earlier this week, but Normal People won't be eligible for a TV Bafta until next year.

While Strictly's win for entertainment programme was a chance to celebrate the 2019 series, questions remain over how this year's will work, given social-distancing guidelines.

"People have to think outside the box to put on such a magnificent show," head judge Shirley Ballas told BBC News backstage. "And everyone is pulling towards making the most spectacular show ever.

"We may only have 10 shows instead of 13, but I'm just delighted we got any at all in the current crisis."

She explained: "[The professional dancers] are self-isolating in the hotel for all the group numbers, that's about as far as I can tell you, but they're taking massive precautionary measures.

"We'll be spaced a little bit more on the [judging] desk, and I guess there'll be one-way traffic going in, and they'll think of everything to make it work. You can't have an autumn and a winter without Strictly!"

Rumours have also been swirling that Bruno might have to miss this year's Strictly because quarantine rules could prevent him flying between the UK and the US - where he also appears on Dancing With The Stars.

But, Shirley said: "If the flight [restrictions] and everything lift, I know that Bruno will do everything in his power to do both shows - that's Bruno."

Will Sharpe won best actor for his performance in Giri/Haji - a series notable for its bilingual nature.

Characters speak both English and Japanese in the show, with subtitles applied to certain scenes. Sharpe says the use of subtitles is less alienating to viewers than it used to be.

"The success of Parasite has been very helpful in terms of that," he said - referring to the Korean winner of best picture at this year's Oscars.

"The feeling I get is the world is becoming increasingly international, and entertainment is shared around the world more readily and more rapidly."

He points out: "It means you have to watch it properly as well, you can't be scanning through your phone at the same time. You have to be engaged with it, and maybe that's why it can be a challenge - but it's worth it."

"Who's Richard? Never heard of him," replied The Muppets' biggest diva.

"He's hosting the Baftas? The IT Crowd? The Crystal Maze?" said Kermit, trying to jog her memory, to no avail.

Kermit then reminded her Ayoade also hosts Channel 4 series Travel Man, "where he takes different celebrities to cities around the world".

"Oh! That Richard Ayoade!" replied Miss Piggy. "I adore him. Love you Richard, kissy kissy. By the way, I'd like to go to Venice."

"You've ruined my losing streak!" joked Jared Harris as he was announced as the winner of best actor for Chernobyl.

It was one of two awards the HBO series won on Friday night - in addition to the seven it took home from the Bafta Craft Awards last month.

But in his acceptance speech, Harris actor mentioned that a producer told him their first choice for the role was triple-Oscar winner Daniel Day-Lewis

"I was actually really flattered," Harris clarified backstage. "I was second to Daniel Day-Lewis, I mean that's an incredible slot to be in. I'll take his cast-offs all day long!"

It's unlikely casting directors will ever be able to secure Day-Lewis again, as he announced his retirement from acting in 2017, but Harris is hopeful he'll return.

"He's a wonderful talent. The way he approaches his work, you can see he needs to take a break every now and then because it's so all consuming, so I'm hoping he'll be back."

"It's been a while since I played to a place this empty," joked Adrian Lester as he took to the stage to present best leading actress.

Tim Minchin, meanwhile, made light of the red carpet's absence, asking the nominees during his song: "Tell me, who is the designer of your tracksuit?"

But some argued this year's ceremony was actively an improvement.

i Facebook i @BBCNewsEnts . If you have a story suggestion email entertainment.news@bbc.co.uk .