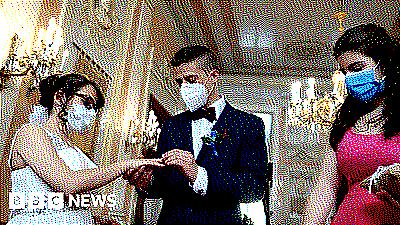 A couple in Madrid getting married in early June

The government has published new guidance on weddings in England, allowing ceremonies of up to 30 people but advising against receptions.

From 4 July, wedding and civil partnerships can go ahead but with only 30 people including the couple, staff such as a photographer and witnesses.

People should socially distance, singing should not take place and hands must be washed before exchanging rings.

Receptions should be small, with only two households able to meet indoors.

Since lockdown began on 23 March, weddings in England have been banned under almost all circumstances.

Wedding dress shops have reopened in England, but with masks and social distancing

Small weddings are currently allowed in the other nations of the UK, which set their own lockdown rules.

In Northern Ireland, weddings of up to 10 people are allowed outdoors. In Wales, ceremonies can also take place, but social distancing must be observed, while outdoor marriages and civil partnerships can take place in Scotland.

Under the new guidance for England released on Monday, small wedding and civil partnership ceremonies are allowed to go ahead only when they can be done safely and follow social distancing guidelines.

The requirement to follow the 2m rule - or 1m with extra precautions - will likely rule out the tradition of a father walking his daughter down the aisle, unless they live in the same household.

The maximum number of 30 people includes everybody at the ceremony - including the couple, witnesses, officiants, guests and suppliers such as photographers and caterers.

The guidance also says receptions that "typically follow or accompany marriages or civil partnerships are strongly advised not to take place at this time".

It says small celebrations should only take place if they follow social distancing guidelines, such as groups of up to two households indoors, or up to six people from different households outdoors.

The reason people are urged not to sing or speak loudly is based on scientific advice which suggests doing so produces more respiratory droplets which enter the air and can be inhaled by others.

Hannah Randolph and her fiance are due to get married at the beginning of September but have decided to leave it to "the last possible moment" to decide whether to walk up the aisle.

The 33-year-old from south-west London worries that if they cancel now, their suppliers will be unlikely to offer a refund as the ceremony can go ahead. But she says: "I just don't think it'll feel like a wedding."

"Weddings are every expensive but you can maybe justify it if you're having a party for 100 people," she says. Under the new guidance, she would have to cut that by two-thirds.

For her, uninviting guests will not be an easy task: "My fiance has got three siblings and their partners and a nephew and once you add that up it means you've got to have some really awkward conversations with members of the family."

While Hannah says weddings can feel "frivolous" given the circumstances, the lack of clarity from the government has left her feeling completely in the dark.

"I can go to a pub and have drinks with a bunch of strangers, but can't have socially distanced drinks with loved ones," she said. "It seems nonsensical."

The government says venues that do not follow the guidance could face action from the Health and Safety Executive or the local authority.

Failing to put in place sufficient measures could constitute a breach of existing health and safety legislation and venues could face enforcement notices, the guidance adds.

One man, who wanted to remain anonymous, said he and his fiancee are due to get married at the end of July but the new rules "have made it impossible to have the wedding as planned".

"It's a joke - the venue we have is a farmhouse and we would have been in the courtyard," he said. "We can protest with hundreds of other people, we can gather to celebrate a football game with strangers, yet we cannot have an outdoor reception with our 25 guests. It goes beyond illogical."

The 2020 spring and summer wedding season in the UK has been hit hard by the pandemic, with many couples forced to postpone their weddings.

Some couples have held substitute celebrations instead, with one couple in Northamptonshire holding a street party and two hospital workers staging a mock wedding while wearing personal protective gear.

While the majority of wedding companies and venues have been flexible about postponing, some brides and grooms said they had been locked in a battle to get their money back.