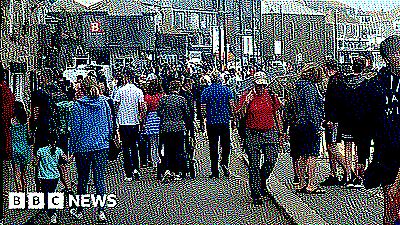 Residents described the situation in St Ives as "absolute madness"

Residents in popular resorts have said they are "too scared" to go food shopping because of visitors pouring down narrow streets and ignoring social distancing.

On social media locals have described some Cornish resorts as being "absolute madness," and "Benidorm on steroids".

Visit Cornwall advised people to plan ahead and change plans if resorts were busy.

She told the BBC she had banned her children from the main shopping street and harbour front because of the crowds and said this was "the general consensus among friends".

Jonathan Pitts, who like Ms Harris manages holiday lets, said: "Sadly I think a lot [of tourists] have the same attitude - that they've come to escape it [Covid-19]."

Vicky White, from Newyln, said: "It makes me very uneasy to go out with my two young kids. The pavements have been bustling.

"It is sad for residents to not be able to enjoy where they live."

Many Perranporth residents said they felt ousted from the town's convenience stores, some of which were overwhelmed by groups of shoppers.

One woman in her 60s who wanted to be known only as Linda, told the BBC she had complained to the head office of one of the stores.

Staff members said on Facebook's Perranzabuloe Community group they faced an "unreal" amount of abuse from customers for trying to comply with measures in store.

Vicky White, a young mum from Newlyn, said she did not feel safe taking her children out

"Everybody is a bit more stressed this year - they don't move out of your way".

But Adrienne Munday, a small business owner there, said Covid-19 concerns had been "over dramatised" in the media and most people were delighted to welcome back the "summer buzz".

Jake Diviney, 21, from Bedford, said it was "busier than expected" but he had felt completely safe on holiday in Perranporth

An extra £500,000 was given to Devon and Cornwall Police by the local Police and Crime Commissioner Alison Hernandez in July to help communities manage the pandemic this summer, enabling the introduction of street marshals.

There were 20 confirmed cases of coronavirus in Cornwall in the week up to 26 July, a rise of 14 from the previous week.

A Cornwall Council spokesperson said: "To help guide people in city and town centres we have marked 'keep right' walkways and put up signing, and there are street wardens on hand to offer advice.

"Cornwall Council will continue to monitor congested sites and provide signs and marshals where they may help, but we ask everyone to be considerate of others and follow public health guidance to help reduce the risk of transmission."

Malcolm Bell from Visit Cornwall said: "It seems busier than ever but we are actually below the normal peak levels".

He advised people to "plan ahead and be prepared to change your plans when volumes of people make social distancing difficult".