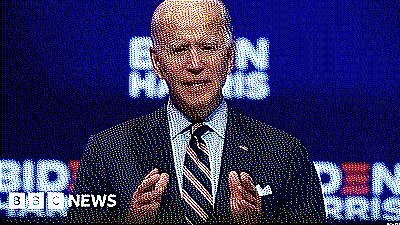 Joe Biden has said he will not allow peace in Northern Ireland to become a "casualty of Brexit" if he is elected US President in November.

The Democratic candidate said any UK-US trade deal had to be "contingent" on respect for the Good Friday Agreement.

Foreign Secretary Dominic Raab has been trying to reassure US politicians about the latest Brexit developments during a trip to Washington.

US Secretary of State Mike Pompeo said he trusted the UK to "get this right".

But US Speaker Nancy Pelosi said there was "no chance" of a UK-US trade deal getting through the US Congress if the UK violated international agreements, undermining the Good Friday Agreement.

After a meeting with Mr Raab, the Speaker of the House of Representatives said the UK's exit from the EU could not be allowed to "imperil" peace in Northern Ireland.

She said the lower house of Congress, which is currently controlled by her party, would defend the 1998 Good Friday Agreement as a "beacon of hope for peace-loving people throughout the whole world".

And Mr Biden, who is going up against US President Donald Trump in November's election, tweeted.

We can’t allow the Good Friday Agreement that brought peace to Northern Ireland to become a casualty of Brexit.

Any trade deal between the U.S. and U.K. must be contingent upon respect for the Agreement and preventing the return of a hard border. Period. https://t.co/Ecu9jPrcHL

Brexit is high on the agenda at the Washington meetings, after the Internal Market Bill cleared its first parliamentary hurdle earlier this week.

The proposed law would give the UK government the power to override part of the Brexit withdrawal deal - which Prime Minister Boris Johnson agreed with the EU last October.

If the law comes into force, it would breach international law - a prospect that prompted an angry response from senior figures in the US last week.

On Tuesday, four senior congressmen also issued a similar warning, saying a UK-US trade deal would be blocked if the UK failed to preserve the gains of the Good Friday Agreement.

In a letter to Mr Johnson, the four congressmen said the plans to give ministers powers to override part of the UK's exit agreement - designed to avoid a hard Irish border - could have "disastrous consequences for the Good Friday Agreement and broader process to maintain peace on the island of Ireland".

"We therefore urge you to abandon any and all legally questionable and unfair efforts to flout the Northern Ireland protocol of the withdrawal agreement and look to ensure that Brexit negotiations do not undermine the decades of progress to bring peace to Northern Ireland," the letter added.

The letter was signed by Democratic congressmen Eliot Engel, Richard Neal, and Bill Keating, who all chair committees in the US House of Representatives, as well as Republican Congressman Peter King.

However, asked about the bill at a joint UK-US press conference Mr Pompeo said: "We trust the UK, we know the complexities of the situation, I have great confidence they will get this right."

Mr Raab said "the threat to the Good Friday Agreement comes from the EU's politicisation of the issue".

He defended the bill as "precautionary and proportionate" adding "what we can't have is the EU seeking to erect a border down the Irish Sea between Northern Ireland and Britain".

Asked earlier about the letter from US politicians, UK Prime Minister Boris Johnson said: "I think when they understand what we are trying to do they will share our ambition and concern which is to protect the peace process.

Former Democrat congressman Bruce Morrison, who co-chairs a committee of American politicians dedicated to protecting the Good Friday Agreement, accused the UK of reneging on its withdrawal agreement with the EU.

He told BBC Radio Ulster: "That deal recognised the importance of the open border on the island of Ireland, and now some of that agreement is being taken back or sought to be taken back by unilateral action by the UK.

"Anything that says 'well we made a deal once, but it's inconvenient now and we're going to recede from that agreement when Northern Ireland is at stake' - we think that's a threat," he added.

In his talks on Wednesday, Mr Raab argued that the government's plans are precautionary and proportionate - and in response to what ministers describe as threats from the EU to block food imports.

The US secretary of state recently accused the UK and its European allies of "siding with the Ayatollahs" for blocking further United Nations sanctions on Iran.