People asked for a Mazda 3 with more power: The 2021 Mazda 3 Turbo review 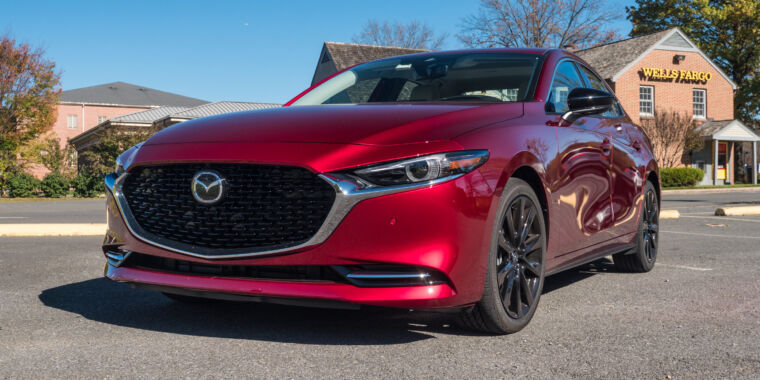 Not everyone enjoys driving, and not every car is enjoyable to drive. And that's fine—and more reason to take the bus for those journeys that are more like a chore. But some of us do take pleasure from the act, and some car companies cater to that. And I don't mean unobtainable supercars, either; there are still mainstream OEMs building affordable cars that appeal to enthusiasts. Like Mazda, for example.

All it took was a couple of hours at the beginning of last year—half of it in Los Angeles' afternoon traffic—to realize that the new Mazda 3 stood out from the pack. It was the first car to use Mazda's new Skyactiv vehicle architecture, and despite Internet grumblings about the rear suspension design, it was a car that felt supple on the road, with a linearity between control input and car reaction that is all too rare in this day and age.

Driving the CX-30 crossover later that year proved it was no flash in the pan, a fact further confirmed when both the 3 and CX-30 were finalists for the 2019 World Car of the Year award (where they came in as runners-up to the Kia Telluride). But car enthusiasts can always find something to complain about, and one thing they've wanted from the Mazda 3 is more power. And so, for model year 2021, you can now get one with a turbo. It starts at $29,900, and it's called the Mazda 3 Turbo.

Obviously, the major new thing here is the Mazda 3 Turbo's engine. It's a 2.5L four-cylinder Skyactiv-G design, first seen in the CX-5 crossover, although here it has all-new engine tuning, and the air-to-water intercooler is integrated into the intake manifold to improve boost response. It also uses a rather high compression ratio for a turbocharged engine, at 10.5:1. Mazda says that this is key to getting better fuel efficiency than an equivalently powerful, naturally aspirated V6.

Despite this 34-percent increase in power and 72-percent increase in torque, plus an engine that's a bit heavier than the naturally aspirated version, the impact of fuel efficiency has been minimal. Specifically, a 1mpg increase in each of the three categories—a combined 27mpg, with 23mpg in the city and 32mpg on the highway (8.7l/100km combined, 10.2l/100km city, 7.4l/100km highway).

The suspension has been tweaked a little, mostly to cope with the Turbo powertrain's added weight. So there are stiffer dampers and stronger steering arms, and the front spring rate has gone up by 15 percent. The rear differential is also new to cope with the much higher torque of this engine. That also prompted a new all-wheel-drive control algorithm, which takes into account vehicle speed and G forces to calculate the vertical load on each tire to determine how much torque to send to each wheel. For the 3 Turbo, Mazda wanted to make the rear wheels do a bit more of the work on dry pavement rather than defaulting to front-wheel drive in high grip conditions like the naturally aspirated car.

Finally, Mazda's experts made some changes to Sport mode. Previously, this mode altered the car's throttle map and shift behavior for the transmission. Now, it has gotten a little smarter. For one thing, the transmission is aware of the car's G load, and "unless there's an extreme need for an upshift or a downshift" it won't change in the middle of a corner. The gearbox now also downshifts under braking while in Sport, and for the first time, Mazda has let that little button modify the G-Vector Control algorithm as well. This adds or subtracts very small amounts of torque to either or both front wheels to make that initial steering input more responsive, and in Sport, that's a little more pronounced.

During a Q&A session with Mazda, the company let slip some bad news: the Mazdaspeed subbrand is dead and buried. As we've discovered from its other recent vehicles, the company is going for a more upmarket feel, particularly with interiors. So the Mazda 3 Turbo is not really a rival to hot hatches like the VW Golf GTI or Hyundai Veloster N. Mazda might have just won the 12 Hours of Sebring outright, but there are no nods to the race track here like deeply winged seats or Alcantara-wrapped steering wheels. It's actually hard to tell a Mazda 3 Turbo from its less-powerful siblings just by looking at them, since the visual cues are subtle. The exhaust pipe is a little bigger in diameter, and the wing mirror surrounds are glossy black, as are the air dam, spoiler, and the 18-inch wheels.

However, that doesn't mean it isn't good to drive. It retains the same balance and sense of fluidity on the road and is as eager to turn into a corner and as predictable throughout that radius as ever. But you do notice the rear axle helping to push you out of a slow corner, and the added power that the turbocharger delivers is a welcome addition. The automatic transmission does let things down a little; even in Sport, the shifts are never quite as fast as you'd like. But a manual transmission is not in the cards for this engine, we're afraid to say.

You can get your Mazda 3 Turbo as either a sedan or a hatch. We tested a sedan, but I prefer the hatchback, which suffers from not-great rear visibility but makes up for it by looking so good. The sedan is slightly cheaper at $29,900, with the hatch at $30,900. There's a bit more of a difference for the Premium Plus package—$32,450 for the sedan but $33,750 for the hatch. (The main difference is that the hatch gets a new front air dam when you get that option, and the sedan doesn't.)

There are a few new features present in the car's suite of advanced driver assistance systems for 2021. There's a Traffic Jam Assist mode for the adaptive cruise control and lane keeping, which deals better with gridlock. There's also rear cross-traffic braking, which will be welcome in the hatch with its wide C pillars, and then all the ADAS from the normal Mazda 3.

To me, all that adds up to a compelling vehicle. But as I explained right at the start, I'm smitten. Adding a bit more power and little more rear-drive bias just makes me love it even more.