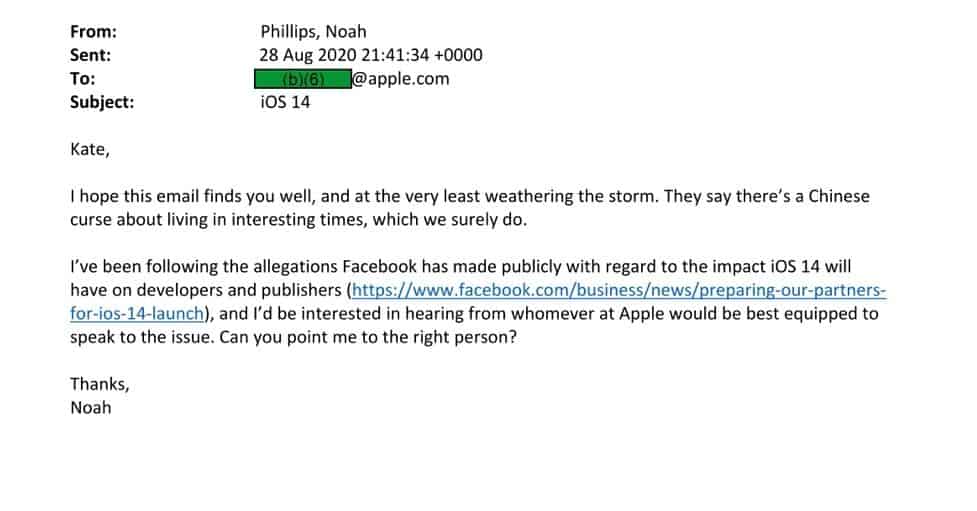 In a  letter sent to the Ranking Digital Rights organization, Apple’s Jane Horvath, senior director of global privacy, reiterated that the company believes that “privacy is a fundamental human right.”

Horvath explains that Apple delayed the App Tracking Transparency (ATT) feature to give developers more time to prepare for the changes.

Facebook has criticized the App Tracking Transparency feature and said it could cause ad revenue to drop as much as 40%.

Facebook has reportedly met with advertising partners to discuss the impact the change has on advertising when users have the ability to easily opt-out of cross-platform tracking.

The company also announced the following in a press release on Sept 10th.

“We, along with the rest of the business community, continue to await final policy details from Apple.”

Given Apple’s delayed implementation of the user permission requirement, we will continue collecting IDFA on iOS 14 in an attempt to reduce unnecessary disruption to our customers’ businesses.”

We checked in with FTC to see if they were looking into some of the claims made by FaceBook against Apple’s iOS 14.

It appears, based on the reports under our FOIA filing, that Noah Philips, FTC commissioner reached out to Kate Adams from Apple on 28th August to understand some of the details around Facebook’s complaints.

A meeting was subsequently scheduled between Apple’s team and FTC attorneys around the first week of September.

Given the timing of Apple’s announcement today, it is clear that the company has good cause to take this position following meetings with FTC.

According to the letter today, Apple continues to emphasize that advertising that protects user privacy is possible.

You can read today’s complete Apple’s letter posted by Chance Miller at 9to5Mac.