$55 board turns a Raspberry Pi CM4 into a router

The $55 Raspberry Pi Router Board for CM4 module isn’t a standalone device though. As the name suggests, it’s designed to use a Raspberry Pi Compute Module 4 as its brains, which lets you select a model with as much (or as little) memory and storage as you’d like. The board isn’t on sale yet, but it should be available for purchase soon from Seeed Studio and Mouser Electronics. 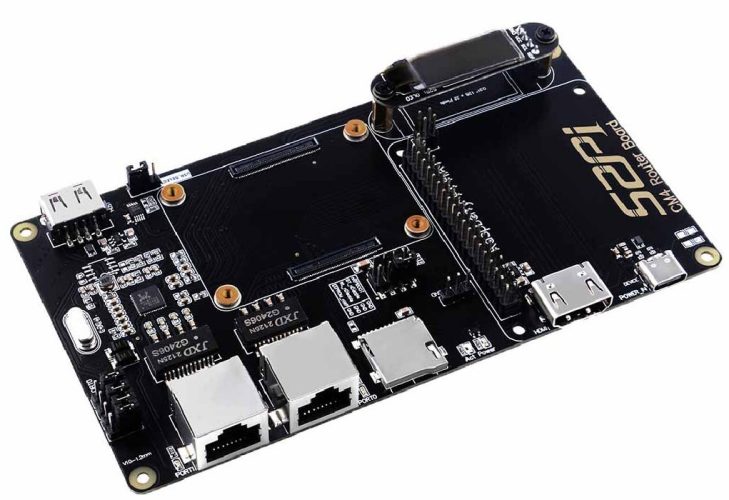 The board measures 146 x 80mm (5.7″ x 3.1″) and features a connector for a Raspberry Pi CM4, as well as full-sized ports and a GPIO header that allows the board to work with standard Raspberry Pi HAT add-ons, which allows you to add functionality like Power over Ethernet.

The Ethernet controller features an RTL811E chip. The display is a 0.91 inch OLED screen that can be used for status information or other functions. And there’s a USB Type-C port for power, a 5V DC fan interface, and two USB 2.0 Type-A ports.

Raspberry Pi’s Compute Module 4 is sold separately, and features a Broadcom BCM2711 processor, which is a 1.5 GHz quad-core ARM Cortex-A72 processor. The CM4 is available with 1GB, 2GB, 4GB or 8GB of RAM and three storage options: 16GB or 32GB of eMMC flash storage or a “Lite” model with no built-in storage at all.

Liliputing's primary sources of revenue are advertising and affiliate links (if you click the "Shop" button at the top of the page and buy something on Amazon, for example, we'll get a small commission).

But there are several ways you can support the site directly even if you're using an ad blocker* and hate online shopping.

Contribute to our Patreon campaign

* If you are using an ad blocker like uBlock Origin and seeing a pop-up message at the bottom of the screen, we have a guide that may help you disable it.