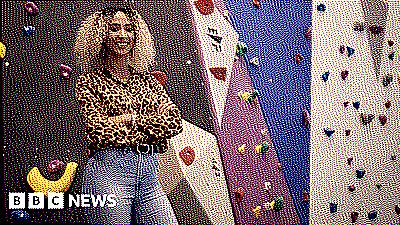 When I first moved back to the area I grew up in, I went around and asked people what the biggest issues in the community were right now.

One thing that came up a lot was kids hanging around and causing trouble.

This is something I've heard since I was a teen.

I'd be out on the streets with my mates because we'd nowhere else to go. And that's pretty much what happens now.

"There's not really anything to do after school," 14-year-old Jennifer Adesanya tells me. "So you'll see groups of young people doing things that don't look good for the local area.

"But it's not because they want to get involved in bad stuff. There's just nothing for them to do."

Gorton in Manchester is in the top 10% most deprived neighbourhoods in England. Action group End Child Poverty estimates more than half of the children here are living in poverty.

So many families simply can't afford to pay for a 12-week course for their kid to go and learn how to play the drums or do gymnastics.

To be honest it feels like not much has changed in the area in the past 20 years.

So when I was chatting to one of the stall owners on Gorton indoor market, I was pretty surprised to hear a new £6 million youth centre was opening this year.

"There's a feeling of excitement, a feeling of about time," its boss Adam Farricker tells me. "Something like this has been needed for a long time."

Adam grew up around here and says there's often a stigma attached to the area - but it has great community strengths too.

"It's a tight-knit community and people look after each other," he says.

When I walked into Hide Out Youth Zone, the first thing I noticed was a colourful climbing wall which has a timer so you can race to the top.

Over two floors there is a boxing ring, a gym, a dance studio, a music and podcast recording studio, a training kitchen where you can learn to cook, chill out rooms with Xboxes plus rooms to host employment and career workshops.

I decided I wanted to be a journalist at the age of 15 after writing for my school's newspaper. So I know giving young people the chance to try out different activities could shape their entire lives.

Cherry Wilson is a proud northerner who recently moved back to Stockport, Greater Manchester, where she grew up.

She studied journalism in Sheffield and was the first in her family to go to university. Her passion is telling the stories of the people and communities behind the headlines, exploring issues that matter to them. She has a great love for cups of tea, jerk chicken, chips and gravy and Coronation Street.

Some of the walls have inspirational quotes on them from famous people from Manchester such as suffragette Emmeline Pankhurst and Oasis singer Liam Gallagher.

I'm told one girl did want a lyric from Manchester rapper Aitch on the wall but it was just a bit too rude. This made me laugh.

Every room is decorated with the symbol of Manchester - the bee - something us Mancs are very proud of.

"The youth centre will help give young people the opportunities they need to grow in life," 16-year-old Alex Kennedy tells me. She was part of a group of local young people that helped shape how Hide Out looks.

"It's something that will be really beneficial to help reduce knife crime, help reduce hate crime, keep people off the streets and doing things like drugs and drinking alcohol," she says.

Hide Out will be open seven days a week for young people aged eight to 19 - or 25 for those with additional needs - and costs £5 for a year's membership and then 50p a visit.

Where was this when I was a kid?! I know how much of an impact a place like this could have on young people here. But they will have to wait a bit longer.

It was due to open in June but has had to abandon its plan because of lockdown and social distancing rules.

Hide Out is part of the charity OnSide Youth Zone network - which has 14 centres across the country from Wigan to Croydon - and they're all still closed.

Many have adapted and offer online sessions, but it's just not the same as face-to-face contact.

Having been on so many Zoom calls over the last few weeks, I can definitely relate to that.

So young people across the UK have no school and nowhere to hang out with friends. As always, it's those who at most at risk that are hardest hit.

I've seen reports from the National Youth Agency and England's children's commissioner about the impact of coronavirus on young people and it's grim reading.

There's so many young people right now being exposed to gangs or stuck in abusive or overcrowded homes - with no place to escape.

But it's not just the most vulnerable that are being affected by the pandemic.

"I definitely feel in limbo," says Alex, who had her GCSE exams cancelled this year.

"There's been extra responsibilities at home, helping my sisters with their school work and stuff.

"This summer was supposed to be the best summer after finishing high school and I'm probably not going to be able to go out."

I have a 10-year-old brother so I know how hard lockdown is on young people.

He misses having me around to play Monopoly Deal and Overcooked on the Nintendo Switch.

He answered one of those quizzes you see parents asking their kids and posting on Facebook. It asked who would he hug first after lockdown, and he said me.

Hide Out boss Adam says his biggest worry for young people going through lockdown is the lack of socialising.

"You'll get some people who are dying to get out the house and they feel like they're in prison," he says. "But the other risk is the young people who are not saying that's an issue.

"They're quite happy to be locked down in the house and are just engaging digitally, and that concerns me as well."

It's obvious to me that places like Hide Out are going to have a big role to play in supporting young people when we come through this.

"Everyone is going to want to go and try it out," says Jennifer. "It's going to be a place for everyone to feel comfortable and to be themselves."

Despite lockdown rules being relaxed on 4 July, so far there's no official guidance from the government on when youth centres will be allowed to reopen.

But Adam is hopeful the young people here will bounce back from the crisis.

"We're Manchester aren't we? There's not a better city in the country that was built to deal with crisis and come back from that better.

"We know that these services are going to be needed more than ever.

"We're here, we're ready and we're eager and passionate to get going and support these young people and allow them to support each other."