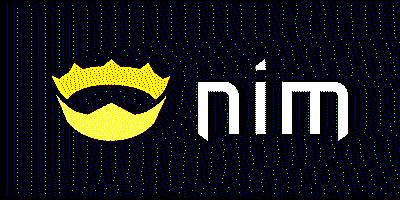 We are very proud to announce Nim version 1.4 after six months of continuous development!

Other than version 1.0, this is probably the biggest Nim release yet and we’re very excited to release it!

It contains exactly 900 new commits which have not already been backported to our previous versions.

There are several new features and standard library additions compared to 1.2.

We tried to keep breaking changes to a minimum, but some bugfixes weren’t possible

without making those necessary changes, and we feel that our users will benefit

We would recommend to all of our users to upgrade and use version 1.4.

the changelog for which is available here.

Check out if the package manager of your OS already ships version 1.4 or

install it as described here.

If you have installed a previous version of Nim using choosenim,

If you don’t have choosenim, you can follow the same

install link as above.

Our contributors are amazing, and there are

Big thanks to all of you, we couldn’t have pulled off this release without you!

If you haven’t watched it already, we recommend

where Araq explains details behind ARC and shows some benchmarks that

As far as we know, ARC works with the complete standard library except for

the current implementation of async, because that introduces cycles that

There are other async implementations in development that don’t introduce cycles.

ORC is the existing ARC algorithm plus a cycle collector, and --gc:orc is our

main new feature for this release!

to get an idea about ARC/ORC’s advantages.

If you haven’t used ARC already with Nim 1.2, all you have to do is to pass --gc:arc

on the command line:

For the majority of programs this is all it takes.

If your code uses cyclic data structures, or if you’re not sure if your code

produces cycles, you need to use --gc:orc and not --gc:arc.

If you have an object that looks cyclic, but you know it isn’t, you can help ORC by

marking it as { .acyclic. } in the following way:

check out the manual.

If you use system.deepCopy in your code, you need to enable it via

--deepCopy:on on the command line.

This is a band-aid and a better solution for this will arrive in the future.

old RTTI has been reported to be unacceptable.

The second gotcha people might encounter is the strict ordering requirement

for custom destructors; this affects old code as well, because finalizers are

# would use the default destructor

This produces the following error message:

The reason is that only after the new(result, finalizer) call the compiler knows

that it needs to generate a custom destructor for the CustomObject type,

but when it compiled tricky the default destructor was used.

The solution is to move the proc tricky after the newCustomObject declaration:

This is a current limitation that will be improved in future versions of the compiler.

This is an experimental feature available via { .experimental: "strictFuncs" .} pragma in

your code or via the --experimental:strictFuncs switch.

It introduces a stricter definition of a “side effect”:

If an object is reachable via a parameter that is not declared as a var parameter,

any mutation to that object counts as a side effect.

Here is an example from

# valid: len does not have side effects

# Error: 'mut' can have side effects

# an object reachable from 'n' is potentially mutated

Added some enhancements to std/jsonutils module.

Added a possibility to deserialize JSON arrays directly to HashSet and

OrderedSet types and respectively to serialize those types to JSON arrays

or to JSON null object if isNone via jsonutils.fromJson and

not required to have a field for every JSON key.

allowed to have fields without corresponding JSON keys.

to the dom module for the JavaScript target.

The default hash for Ordinal has changed to something more bit-scrambling.

one in an instantiation context while -d:nimIntHash1 recovers it globally.

be inherited by child processes. In particular, these modules are affected:

flag has been added to all procs that create sockets, allowing the user to

control whether the resulting socket is inheritable. This flag is provided to

ease the writing of multi-process servers, where sockets inheritance is

For a transition period, define nimInheritHandles to enable file handle

inheritance by default. This flag does not affect the selectors module

due to the differing semantics between operating systems.

nativesockets.setInheritable are also introduced for setting file handle or

socket inheritance. Not all platforms have these procs defined.

The file descriptors created for internal bookkeeping by ioselector_kqueue

and ioselector_epoll will no longer be leaked to child processes.

strutils.formatFloat with precision = 0 has been restored to the version

(see #13222); instead they now use getCurrentDir to resolve those cases,

and this can now throw in edge cases where getCurrentDir throws.

now supported in JavaScript, with the limitation that any buffer pointers

used must be castable to ptr string, any incompatible pointer type will not

work. The lexbase and streams modules used to fail to compile on

NimScript due to a bug, but this has been fixed.

The following modules now compile on both JS and NimScript: parsecsv,

accept an existing string to modify, which avoids memory

of the original masking functions, mask/masked, and varargs support for

with regular proc definitions (although you cannot use semicolons).

Pragmas and using a name are now allowed on the lefthand side of =>. Here

is an example of these changes:

The fields of times.DateTime are now private, and are accessed with getters and deprecated setters.

Most procs raise an assertion error when given

The proc times.isInitialized has been added which can be used to check if

a DateTime has been initialized.

Fix a bug where calling close on io streams in osproc.startProcess was a noop and led to

hangs if a process had both reads from stdin and writes (e.g. to stdout).

The callback that is passed to system.onThreadDestruction must now be .raises: [].

The callback that is assigned to system.onUnhandledException must now be .gcsafe.

net.newContext now defaults to the list of ciphers targeting

per Mozilla’s recommendation instead of ALL. This change should protect

adequate compatibility with the majority of the Internet.

Added random.gauss, that uses the ratio of uniforms method of sampling from a Gaussian distribution.

Added typetraits.elementType to get the element type of an iterable.

Added the jsre module, Regular Expressions for the JavaScript target..

initial size must be a power of two - this is done internally.

Proc rightSize for Tables and HashSets is deprecated, as it is not needed anymore.

Removed deprecated symbols from macros module, some of which were deprecated already in 0.15.

asyncdispatch.PDispatcher.handles is exported so that an external low-level libraries can access it.

Proc math.round is no longer deprecated. The advice to use strformat instead

cannot be applied to every use case. The limitations and the (lack of) reliability

of round are well documented.

from the database that matches the protocol name.

Added the below toX procs for collections. The usage is similar to procs such as

sets.toHashSet and tables.toTable. Previously, it was necessary to create the

items or an openArray of pairs.

deques.toDeque, which creates a Deque from an openArray.

at which progress callbacks are called.

The =destroy hook no longer has to reset its target, as the compiler now automatically inserts

The = hook is now called =copy for clarity. The old name = is still available so there

is no need to update your code. This change was backported to 1.2 too so you can use the

without restrictions as long as the case object doesn’t have a custom destructor.

The discriminator value doesn’t have to be a constant either. If you have a

fields, it is recommended to refactor the object into 2 objects like this:

with writing typed macros. The old behavior for backwards compatibility can be restored

The typed AST for proc headers will now have the arguments be syms instead of idents.

This helps with writing typed macros. The old behaviour for backwards compatibility can

The keyword from is now usable as an operator.

Exceptions inheriting from system.Defect are no longer tracked with

the .raises: [] exception tracking mechanism. This is more consistent with the

built-in operations. The following always used to compile (and still does):

a b # can raise an DivByZeroDefect

The reason for this is that DivByZeroDefect inherits from Defect and

Added the thiscall calling convention as specified by Microsoft, mostly for hooking purposes.

Deprecated the { } pragma, because it was always ignored by the compiler anyway.

“for-loop macros” (see the manual) are no longer

an experimental feature. In other words, you don’t have to write pragma

Added the .noalias pragma. It is mapped to C’s restrict keyword for the increased

performance this keyword can enable.

items no longer compiles with enums with holes as its behavior was error prone, see #14004.

Added the std/effecttraits module for introspection of the inferred effects.

preferred way of writing these, emphasizing their unsafe nature.

Specific warnings can now be turned into errors via --warningAsError[X]:on|off.

The define and undef pragmas have been de-deprecated.

so that the output is saved to $nimcache/main$exeExt, using the same logic as nim c -r to

(likewise with other hints and warnings), which is consistent with all other bool flags.

Added the new hint --hint:msgOrigin will show where a compiler msg (hint|warning|error)

was generated; this helps in particular when it’s non obvious where it came from

either because multiple locations generate the same message, or because the

Added the new flag --backend:js|c|cpp|objc (or -b:js etc), to change the backend; can be

how an example is compiled and run, for example to change the backend.

nim doc now outputs under $projectPath/htmldocs when --outdir is unspecified

(with or without --project); passing --project now automatically generates

an index and enables search.

Removed the --laxStrings switch for mutating the internal zero terminator on strings.

now “typed” instead of “stmt”.

enabled. This change is most relevant for the --gc:arc, --gc:orc memory