West Coast fires: How we outran a California wildfire 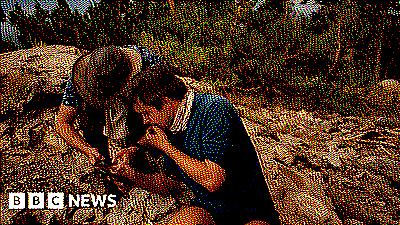 Four hikers found themselves trapped by the quick-moving Creek Fire

Across the American west, wildfires are burning at a historic speed and scale, engulfing almost five million acres of land across three US states - California, Oregon and Washington - since early August.

That's the situation that four hikers - Asha Karim, Jaymie Shearer, Lucas Wojciechowski and Stephen McKinley - found themselves in earlier this month - ambushed by California's quick-moving Creek Fire and forced to outmanoeuvre the blaze, which was swallowing tens of thousands of acres.

One Saturday, Karim, Shearer, Wojciechowski and McKinley met at the Mammoth Trailhead in Sierra National Forest. The group had assembled for an eight-day camping trip through the Ansel Adams Wilderness to celebrate Karim's birthday.

When the group set off that morning, California firefighters were already battling more than two dozen fires across the state. They planned accordingly, plotting their route to favour areas with little or no smoke, far away from active blazes.

But they did not yet know about the Creek Fire, a massive wildfire that had ignited the night before and was now tearing through the Sierra National Forest.

As they started in on the first five miles, the smoke had started rolling in, becoming thicker, as the skies grew dark. They assumed it was from the existing blazes.

"I was very sceptical to believe it was a new fire," Wojciechowski said. "What are the chances that there's already a new forest fire right next to us?"

Black plumes of smoke grew closer. It became hard for them to breathe.

They decided to press on to an overlook, emerging out of the forest for a view of the west side of Sierra Nevada's Ritter mountain range. By then, their route had disappeared into smoke. With three satellite phones between them, they texted friends, sending out their coordinates, trying to gather information.

"We started figuring out what we'd need," Karim said. "Is there a new active fire? Is it blocking the road? What is our escape route?"

They sat there, at the edge of a growing pyrocumulus cloud - also known as a fire cloud - and listened to its rolling thunder.

They soon learned the fire was new, and were sent a single set of coordinate points which situated the blaze just two miles from the road that they needed to take out.

"We decided that it would not be wise to keep going around that dial, deeper into our hike," Karim said. They decided to turn around and hike back to Karim's 1994 Toyota RAV4 at Isberg trailhead.

The hike back was a blur, Shearer said.

"It always felt like we were one step away from feeling panic and feeling fear," she said. "I think if I would have been alone, and without friends or resources, I would have fallen into that."

Shearer, a trained wilderness guide, had her friends adopt a beloved hiker's adage: slow is smooth and smooth is fast.

"You learn how to be slow and methodical even when there are scary things happening," Wojciechowski said. "Slow is smooth and smooth is fast: if you move slowly, you'll make the right decision and it will ultimately be faster."

They reached Karim's car at around 4pm and tried to trace their way back out of the woods.

"By the time we got to the car, we believed that there was still some time for us to get out," she said.

The main road out crossed a collapsed bridge, so they set off on a detour.

"This convoy of cars sped at us, honking at us, flashing high beams at us, telling us to go the other way, but no one would stop to talk to us," Karim said. "We don't know what's ahead, but they do, and they're not stopping."

What they didn't yet know was that the road ahead of them leading up to the Mammoth Pool Reservoir, which was being devoured by the Creek Fire and where the California National Guard would later stage a days-long rescue effort for hundreds of trapped hikers.

They ventured a little further, before spotting an elderly man sitting in his pickup truck. He told the group he was fleeing his home "down there", nodding toward the fire raging south of them. They asked him if he knew of a way out and he offered them some names of landmarks, but little certainty.

They had yet to run into an official on the trail.

"It's kind of like looking for the adult in the room. Everyone is doing the best with the information that they have but everyone has different information," Karim said. "You're just trying to figure out: who's at the wheel? Who's driving here?"

The group decided to turn back. Again, they passed a caravan of cars speeding by them in the opposite direction.

"We saw cars driving 70mph driving east, cars driving that same speed driving west," Wojciechowski said. "No one knew what was going on. Everyone had a totally different narrative about what was happening. The general pervasive attitude was confusion."

"We literally saw people making every conceivable decision out there, and I realized that no one knew what was going on. We just needed a plan and stick to it."

The group had assembled to celebrate Karim's 25th birthday

That next plan was to try an escape on foot, hiking through the Mammoth Trail to where Wojciechowski's van was parked at Red's Meadow in Devils Post Pile National Monument - 13 miles northeast of them.

They drove back to the Mammoth Trailhead, gathering three days of supplies and abandoning the rest - along with Karim's RAV4. They used the falling ash to paint a message on the car's window: "Took Mammoth Trail to Red's Meadow to escape fire."

"It felt really strange just going in so close to sunset," Karim said. "There was this dying light in the forest and you couldn't tell where the sun was. The sky was just this very opaque, milky orange and then deep red. The cameras can't quite get it right. It looks like a filter."

It looked "surreal," Shearer said. "I just remember staring and noticing that wow, those trees look blue. The sky is glowing silver."

For about four hours they hiked, pausing every 30 minutes or so to take a breath, refill their water, and gather their bearings.

"It's just this air of - is everything else burning around us? The lack of information was like the elephant in the room," Shearer said.

As the sky got darker, the eerie orange glow of sky faded.

"As it got darker we couldn't really see the orange glow anymore. So the only way I could kind of guess if the air quality was getting better or worse was by how much ash was falling out of the sky." Wojciechowski said.

When Shearer got to her tent after a day of hiking, she said, her feet were entirely black with soot.

At 22:00, they made camp for the night. When Shearer took her socks off, her feet were black - caked in dirt and soot. Texts from friends came through to their satellite phones, telling them that the fire was up to 15 miles west from them. In the morning, they continued on.

At one point, Shearer wondered if they would need to hit the SOS button on their satellite phones. "But all my training told me that if we're still walking, we're not pressing this button," she said.

They finally reached the van at around 16:10, exhausted but excited to have made it and to drink the Mai Tai cocktails they had waiting in the boot.

They spent the rest of the week at Karim and McKinley's place in Berkeley. They had hoped for another hike - all four had booked off a week of work in anticipation for their trip - but the ongoing fires left them little room.

"When we got back, everyone showered, everyone had a delicious meal, and then we started thinking: 'Ok, so where are we going now? Let's go backpack somewhere,'" Karim said. "But then we looked at the AQI [Air Quality Index] map of California and our hearts completely sank".

The group kept pace according to a favourite hiker phrase: slow is smooth and smooth is fast.

They've opted for a "staycation" instead, Karim said, making dinners at home together and walking their two dogs. They have tentative plans for a reunion trip in October to retrieve Karim's car, still sitting at the Mammoth Trailhead where they left it.

They said they're grateful to have made it out but the excitement has been blunted by the state of their fire-ravaged California.

In California alone, authorities are still battling roughly 20 active fires. As of 15 September, the Creek Fire is at just 16% containment and has swallowed more than 220,000 acres in the Sierra National Forest. So far this year, the state has seen six of the 20 largest fires on record.

Smoke from the fires, up and down the west coast, has reached as far as New York City, nearly 3,000 miles away.

"Honestly, the smoke's kind of following us," Shearer added. "There isn't a huge relief because we're still in it, in a way, now the whole state and the whole west coast is still in it with us."