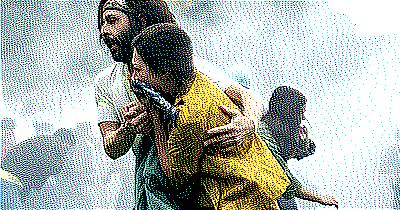 Speechifying is part of the Aaron Sorkin mode. His second outing as a director, Netflix’s The Trial of the Chicago 7, is no exception. The new film is chock full of motormouthed characters, nonstop quips, and walk-and-talks.

It’s also the best possible outcome for such a high dose of Sorkin. In his telling of the 1968 Democratic National Convention protests and their aftermath, speeches and arguments are endless, but rarely pompous (most of the time), fitting perfectly into a story about changing hearts and minds through protest. Most of the cast handle the weight of those monologues with these ease, but The Trial of the Chicago 7 doesn’t entirely escape the pitfalls that can often plague ensemble pieces: as is true of a protest or of an acting troupe, the film is only as strong as its weakest link.

Sorkin fills his recreation of the historical moment, in which Chicago police incited a riot and injured over 500 civilians, with an all-star cast; even the small parts are played by recognizable faces. Sacha Baron Cohen and Jeremy Strong play Abbie Hoffman and Jerry Rubin, Yippies who come into conflict with Students for a Democratic Society members Tom Hayden (Eddie Redmayne) and Rennie Davis (Alex Sharp) and their insistence on totally peaceful protests. Being tried along with them are conscientious objector David Dellinger (John Carroll Lynch), activists Lee Weiner (Noah Robbins) and John Froines (Daniel Flaherty), and Black Panther Party co-founder Bobby Seale (Yahya Abdul-Mateen II). Lawyer William Kunstler (Mark Rylance) represents the lot of them, except for Seale, whose lawyer is absent, a fact that the judge, Julius Hoffman (Frank Langella), refuses to acknowledge.

The action in the film flips from the courtroom to flashbacks that fill out the events leading up to the trial and back again. There’s an inherent fallacy at work in the court: part of the task set to Assistant U.S. Attorney Richard Schultz (Joseph Gordon-Levitt) is to argue that all of the defendants are cut from the same cloth, but their inability to get along with each other while one trial — let alone in the days leading up to the protests — makes it clear that there’s no grand conspiracy to overthrow the U. S. government at work. All of these men want change, but disagree as to the method through which to achieve it.

Their arguments form the backbone of Chicago 7. In dialogue-heavy scenes orchestrated in courtrooms and makeshift headquarters, they butt heads over and for their respective ideologies, while, as they’re forced to walk through the same fire, they learn their common goals. The straightlaced Hayden and the stand-up comic Hoffman seem the furthest apart, and get into more than one argument that begins with quiet rebuttals and ends with emphatic yelling. Though the idea of figuring out if there’s any one right way to protest is one that rings particularly true to the issues of the age the film is coming out in, the film flags a little as more and more dramatic weight is given to Hayden. Redmayne may have a better American accent than Cohen, but he lacks Cohen’s charisma, and can’t quite breathe life into a relatively stoic part. Cohen, on the other hand, eats up the scenery without coming across as buffoonish, and is paired well with Strong, whose mopeyness plays well against Cohen’s sharp edges.

As Hoffman, Langella is playing a cartoon villain, a man so bigoted and incompetent that it’s almost difficult to believe such a figure was real. But, as the call to protest and effect change seems to hint at, things haven’t changed so much since these trials occurred. When Hoffman has Seale bound and gagged in court to prevent him from speaking further (after refusing to allow him proper representation in court), he’s appalled at being called a racist by two of the lawyers present. Rylance, meanwhile, comes the closest to feeling like a real person, his trademark thoughtfulness making Sorkin’s dialogue come across as more natural and less like a premeditated bit, with Lynch as a close runner-up.

A few superb performances can’t reel in a film that, while trying to speak to the present moment, feels idealized. Though text on the screen informs the viewer as to how much time has passed, there’s otherwise no sense of the passage of time, of the months that dragged on as the trial continued. On top of that, Sorkin’s characterization of Schultz, who was not historically sympathetic to the men on trial, as someone who understood that the case he was fighting was crooked, comes across as pandering given how incendiary every other aspect of the film is about fighting for change.

With those flaws in mind, the film seesaws between being a persuasive argument for standing up for what’s right and simply being an actor’s showcase. The sheer number of people in the cast — granted, mostly men — mean that, by virtue of being an ensemble piece, the butter on the metaphorical toast is spread a little thinner. When, in a final dramatic moment, the music swells, it feels comedic; that saccharine quality and the focus on Hayden bring out a sense of self-righteousness that isn’t uncommon in Sorkin’s writing, and now his directing.

Ultimately, however, the revelation that inaction for the sake of appearing respectful to those in power is damaging, and that speaking the simple truth can be a weapon, lends The Trial of the Chicago 7 a sense of weight and meaning in the current moment.

The Trial of the Chicago 7 is streaming on Netflix now.